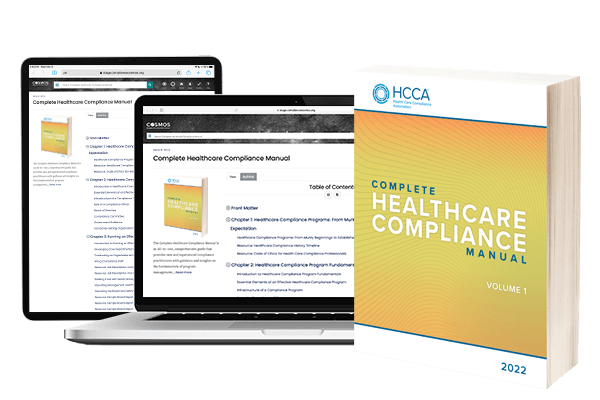 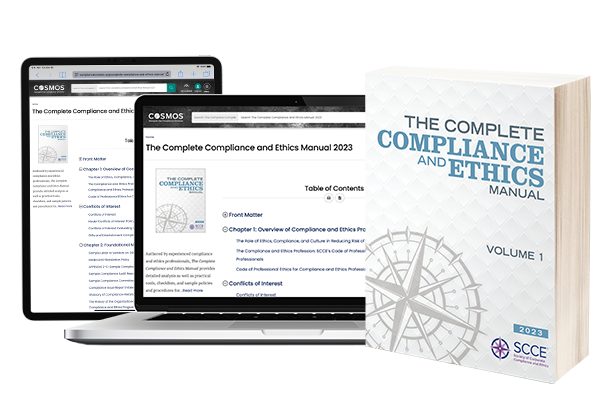 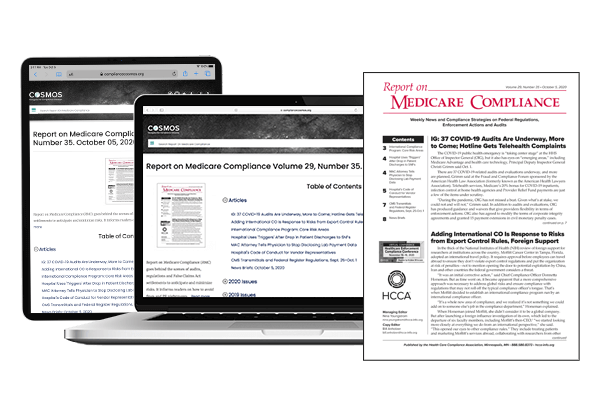 Practical News and Strategies for Complying With HIPAA 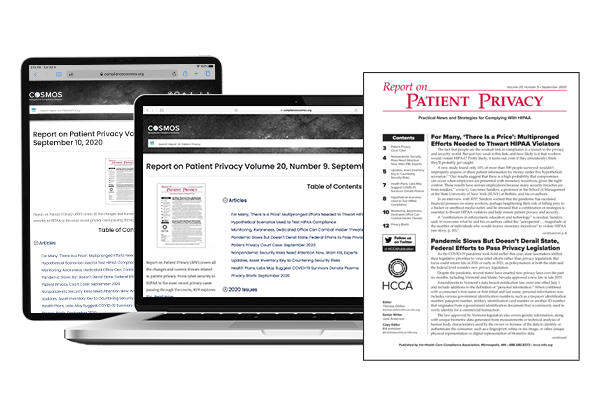 News and Analysis for Colleges, Universities, AMCs and Other Non-Federal Entities 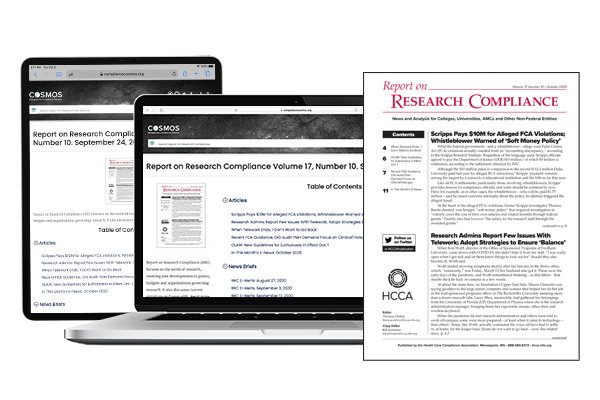 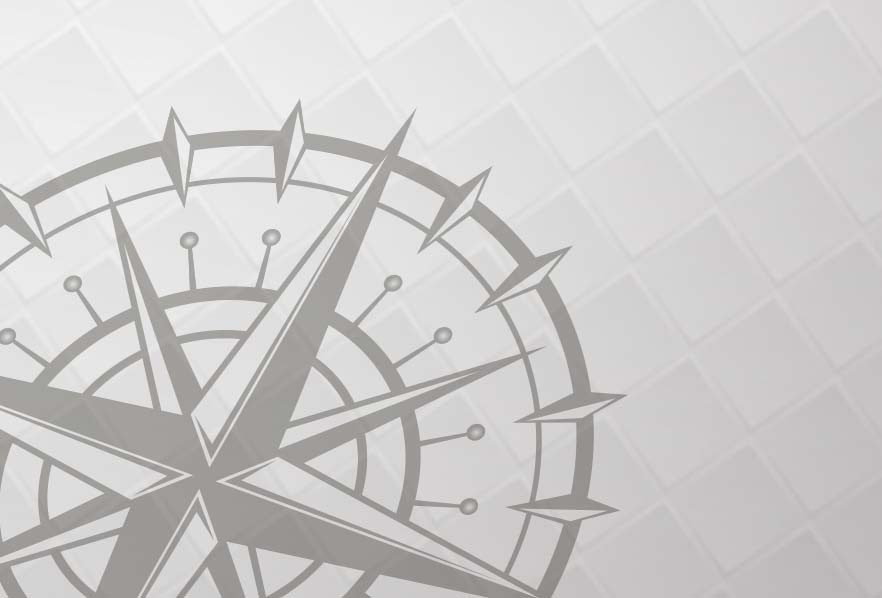 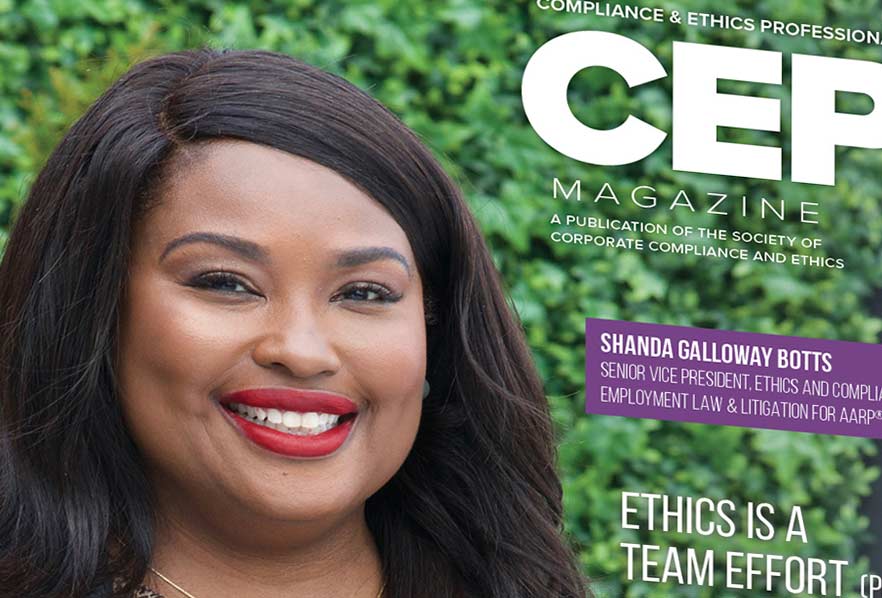 Global insights and advice to help you address today's compliance challenges.
Learn from experienced compliance professionals how to establish, maintain and improve your compliance program. 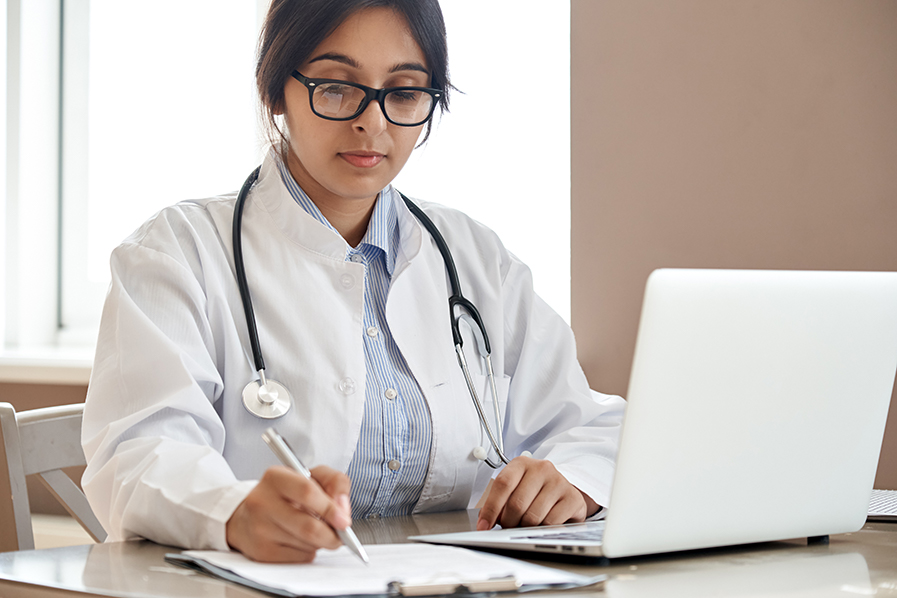 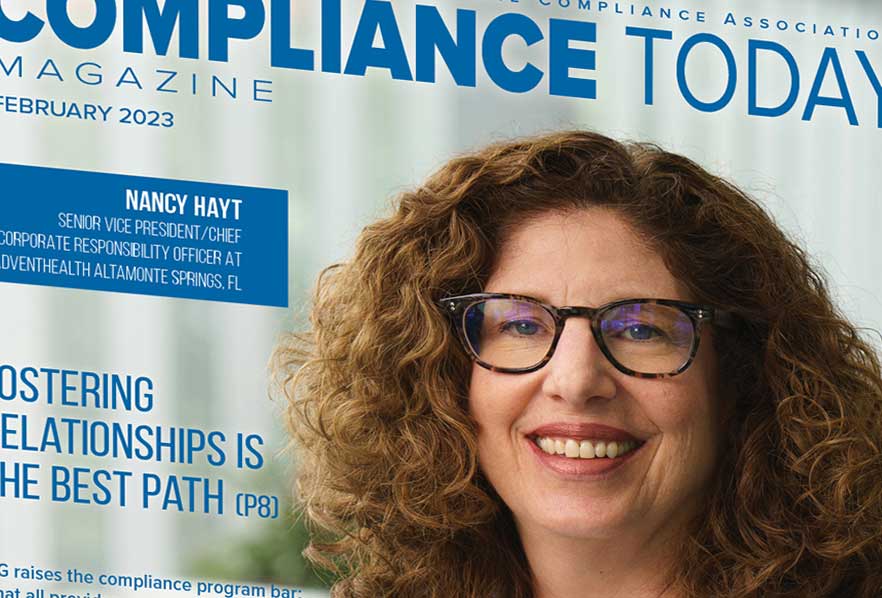 Stay on top of the changes that matter most to health care and research compliance professionals.
Look to a source you can trust for expert strategies and proven, practical advice.

COSMOS is the new online platform from the Society of Corporate Compliance and Ethics & Health Care Compliance Association.

Welcome to the newest version of COSMOS.

Now more than ever, COSMOS can help you complete your compliance research quickly and easily–providing you a comprehensive set of resources so you can feel confident.
Would you like to learn more?

The Article you requested has been sent to the email address your provided. We hope the article contains the information you are looking for. Please feel free to continue exploring our COSMOS Universe for additional articles, newsletters, book publications and conference materials to meet your compliance and ethical practice needs.

Don't laugh. It has taken only ten years for the pipe dream of routine and reusable space travel to become a ho-hum, near-daily reality, thanks primarily to Elon Musk's SpaceX. Assuming similar progress over the next twenty years, what are the implications - out there - for compliance?

Stephen Paskoff on The Speak Out Act [Podcast]

On December 7, 2022 The Speak Out Act became law. Stephen Paskoff, the President and CEO of ELI explains that the law was spurred by the #MeToo movement and the Non-Disclosure Agreements (NDAs) that limited recourse available for victims. It was designed to make it easier for victims to come forward, and for improper behavior to remain hidden.

Switzerland-based mining and commodities giant Glencore plc landed on the FCPA Blog's top ten last year when it paid $700 million to settle widespread FCPA offenses. How does its anti-corruption and bribery policy compare?

A federal jury in the Northern District of Illinois convicted a Chicago man yesterday for participating in a conspiracy to pay approximately $25 million in illegal kickbacks to generate business for his durable medical equipment pharmacy.

Medical device manufacturer DePuy Synthes, Inc. (DePuy), a subsidiary of Johnson & Johnson, has agreed to pay $9.75 million to resolve allegations it violated the False Claims Act by paying kickbacks to an orthopedic surgeon based in Massachusetts to induce his use of DePuy products.

The Securities and Exchange Commission today charged Avraham Eisenberg with orchestrating an attack on a crypto asset trading platform, Mango Markets, by manipulating the MNGO token, a so-called governance token that was offered and sold as a security.

The Securities and Exchange Commission is seeking candidates for appointment to the Small Business Capital Formation Advisory Committee to provide advice and recommendations on Commission rules, regulations, and policy matters relating to small businesses, including smaller public companies.

The Justice Department announced today that it has reached a settlement agreement with Corp IV Holdings Inc., doing business as Masterson Staffing Solutions (Masterson Staffing), a staffing company based in Minnesota. The agreement resolves the department's determination that Masterson Staffing violated the Immigration and Nationality Act (INA) by routinely discriminating against its non-U.S. citizen workers when checking their permission to work in the United States.

The Securities and Exchange Commission today charged Nexo Capital Inc. with failing to register the offer and sale of its retail crypto asset lending product, the Earn Interest Product (EIP).

Perhaps the biggest non-Covid change in the corporate landscape over the last few years has been the growth of the Environmental Social and Governance (ESG) movement and its call to measure business on more than P&L statements. While some consider it a passing phase, Stuart Pardau, Associate Professor of Business Law, Professional Practice at Miami Herbert Business School at the University of Miami, thinks it is here to stay.